A full-on graphical update for the 1983 port of Donkey Kong to the NES/FC. All in-game tiles have been replaced in this hack; most existing sprites have since been redrawn completely for the sake of this project, while a smaller portion of the graphics have just been altered to bring a bit more flair to the hack.

For us every day Mario fanatics the classic Super Mario Sounds will always hold a special place in our hearts. A lot of these downloads are in their original midi format and sound exactly like they do in the game!

In this collection there is Mario background music as well as sound effects such as Jumping, shooting fireballs etc. If you have a Mario sound that isn't listed here please get in contact with us!

We just released a Feb. 5 '89 prototype of DuckTales for the NES!
If you'd like to support our preservation efforts (and this wasn't cheap), please consider donating or supporting us on Patreon. Thank you!

Donkey Kong doesn't really need much of an introduction. Despite missing an entire level (the so-called 'pie factory'), the NES port is otherwise faithful to the arcade original.

Lurking within the ROM are a handful of objects that never appear anywhere. The first two seem to be early versions of the handbag and parasol; the hat appears in the arcade version, but not the NES port; and the bouquet of flowers doesn't appear in any version, though it probably would have served the same purpose (bonus points) as the other items.

Sprites of Mario and Pauline sitting, possibly meant for a different ending.

The controls have been slightly modified so the player can press Up and Down to switch between options at the title screen.

To commemorate the 25th Anniversary of Super Mario Bros., a limited-edition red Wii was released. In Europe, this came with a modified Virtual Console version of Donkey Kong pre-installed that follows the arcade version more closely (rather than, you know, actually releasing the arcade version, which was in copyright limbo at the time). This new version also received an official release on the 3DS in the United States during the last few months of 2012, via a limited-time Club Nintendo promotion.

Shortly after the game's release, the ROM was extracted from its WAD container and distributed online, at which point it was discovered that Original Edition is nothing more than a hack of the original retail ROM...and a rather sloppy one at that. 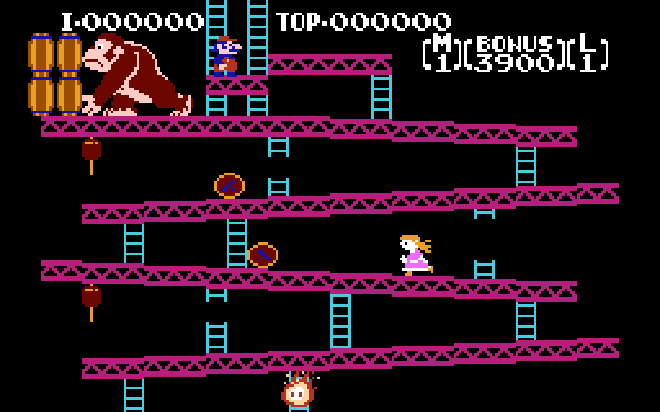 The copyright date adds '-2010', with '1981' changed to '1983' as that was when the Famicom version was released. The text 'CO.,LTD.' was removed, and 'MADE IN JAPAN' was moved over one space. Before being soft-patched, the 3DS version lacked the copyright symbol and showed a copyright year of 2008, possibly indicating the originally planned release was to coincide with the 25th Anniversary of the Famicom version.

50M (the 'pie'/cement factory), commonly omitted from Donkey Kong ports of the 1980s due to memory limitations, is present.

Donkey Kong now carries Pauline up the ladders to the next level, much like the arcade version.