Rogue Spear delivers and improves in ways Rainbow Six players could only dream of. Learning from past blunders, Red Storm perfected the existing elements of the game while adding new features that fit seamlessly into gameplay. In every conceivable way, Rogue Spear was the Rainbow Six game the original was meant to be.

Rogue Spear has already proved to be one of the most popular multiplayer games around and the Urban Operations mission pack looks set to boost its life span with bags of new single and multiplayer features.

Urban Operations includes two new mini-campaigns, more weapons and eight new multiplayer maps, as well as a custom mission builder, which provides virtually limitless options for single players. You can adjust the number of terrorists and choose from six game types, including a new one, Defend, where the object is to play a single soldier guarding a switch from the terrorists (an important switch, mind).

The main campaign begins in a Turkish bazaar with lots of innocents, who you have to avoid killing. Then the action moves on to the London Underground where you have to advance along the rail tracks to find and rescue hostages from a tube station. Next stop is a library in Venice where you have to defuse a bomb, then you head for the slums of Mexico City and, finally, there's a showdown in a hotel in Hong Kong.A second campaign contains five missions from the original Rainbow Six, which you can now play using the better Rogue Spear engine. Locations include the infamous Hacienda, which has had a few subtle changes, and the Amazonian research facility.

Need more weapons? No problem - Urban Operations brings with it a new light machine-gun, the M249 SAW, plus a silenced sniper rifle and one or two others. Need more gun fodder? Try on the increased number of innocent civilians for size - they always get in the way and make the missions that much harder. The AI has improved too, and terrorists now throw grenades at the Rogue Spear operatives. The design team has even added an in-game management module that allows you to modify third-party weapons and skins.

The pack also provides ten new multiplayer maps taken from the campaigns and another eight specially designed for multiplayer games, including a Siberian base and a small but demanding graveyard map, where you can dodge behind individual headstones. There's even a submarine base full of pipes which release clouds of steam when hit by stray - or deliberate - shots. A big bonus for Rogue Spear addicts. 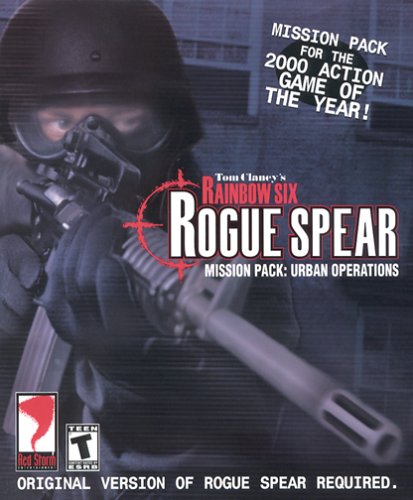